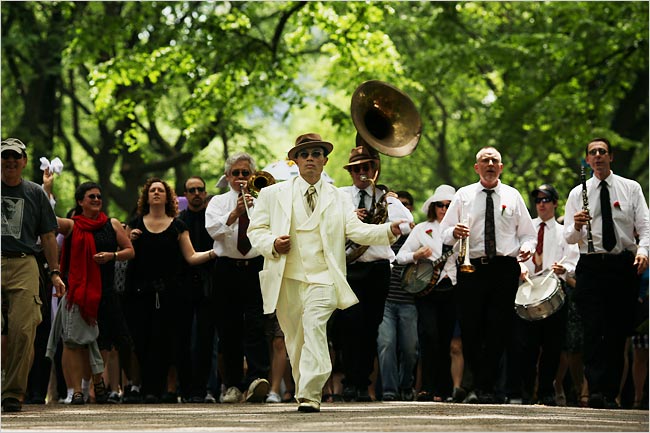 We are all inspired by someone now and then. Today we’d like to celebrate the life of Frankie Manning, a man who inspires me and many many of you too. I just watched the new documentary “Frankie Manning: Never Stop Swinging”, and even though I have seen a lot of the footage before, I was still left awe struck and inspired. Julie Cohen, director of the documentary simply said.

“Frankie Manning was a man who truly LIVED every moment of his life, Having spent the past two months watching hundreds of hours of footage of him dancing from the 1930’s to the present, I’ve seen the joy he took in every step.”

I couldn’t agree more. I’m amazed that a man that I’ve never met, and first heard about only six months ago has become such a strong example and motivation of how I want to live my life.

I encourage everyone to checkout this excellent documentary for yourself. You can watch it in it’s entirety below:

“Frankie Manning: Never Stop Swinging features the last major interview of Frankie Manning before his passing, as well as precious archival footage of his dancing from the 1930’s to 2009 in New York, Hollywood, Sweden, France, Italy and Singapore. Footage highlights include scenes of Manning’s birthday parties, where he danced with one woman for each year he’d been alive, the legendary dance scene choreographed and headlined by Manning for the film “Hellzapoppin,” and the phenomenal duet with his 76-year-old son, Chazz, himself a professional dancer. Frankie was a born storyteller, with a huge smile and an even bigger laugh.

Please keep in mind that comments are moderated and rel="nofollow" is in use. So, please do not use a spammy keyword or a domain as your name, or it will be deleted. Let us have a personal and meaningful conversation instead.